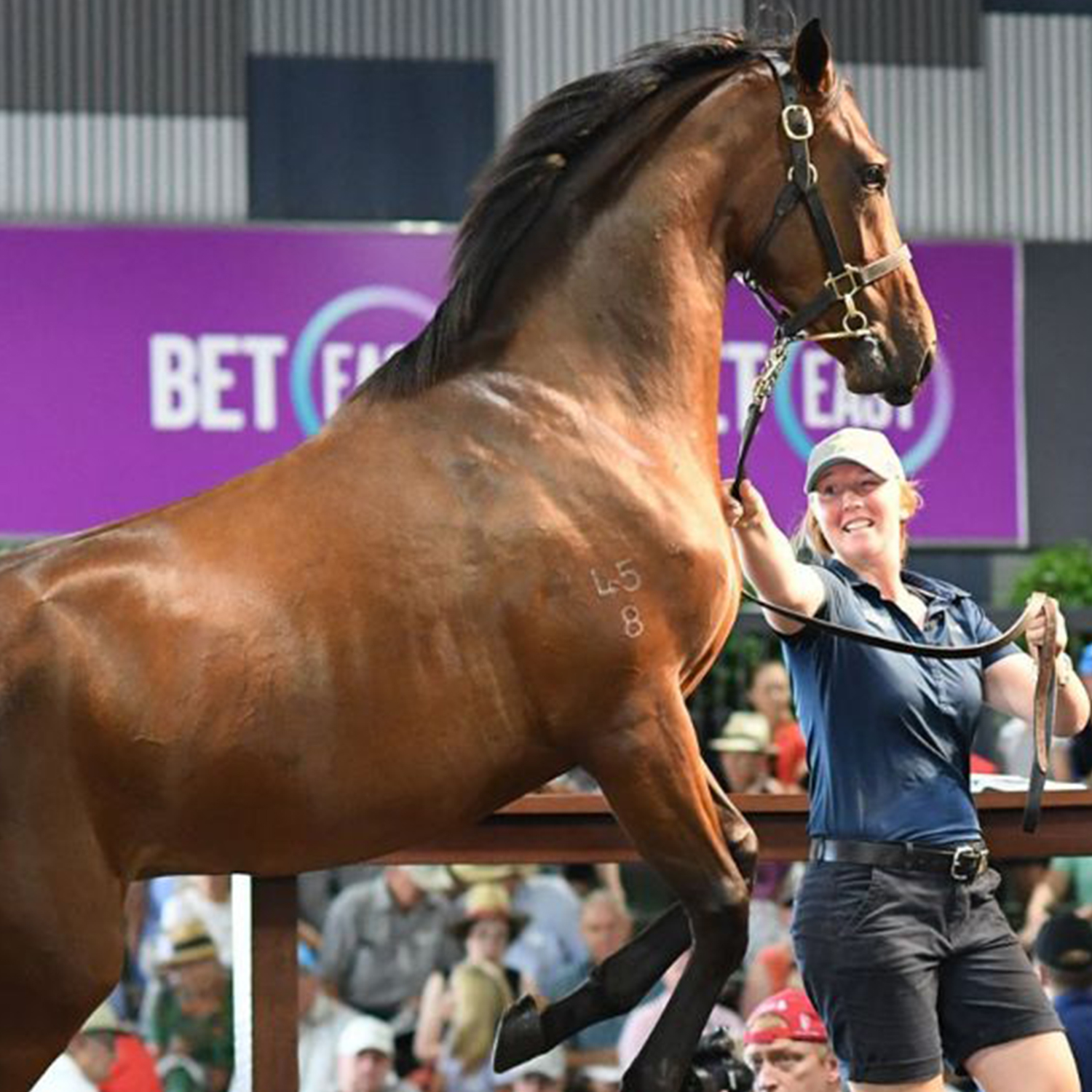 A good type, a good eye and a good environment. They are the factors which keep coming up when you talk to pinhookers about what it takes to achieve success in their line of business.

Last week’s Magic Millions Gold Coast Yearling Sale saw some spectacular results for those who backed their judgement at the weanling sales in 2019, with 23 lots returning a better than $100,000 profit on their sales price for their vendors in Book 1.

They were highlighted by the $650,000 that Redwall Bloodstock, selling through Widden Stud, got for Lot 301, a filly by first season stallion Frosted (USA) out of Fast Fleet (Fastnet Rock). It was an increase of $350,000 on what it paid for the half-sister to Santa Ana Lane (Lope De Vega {Ire}) as a weanling.

Ampulla Lodge, another specialist at pinhooking, achieved an excellent result of $520,000 for Lot 160, a Not A Single Doubt colt it purchased last year for $280,000.

Both of those success stories were based on the pinhooker backing their judgement, understanding the market and seeing the potential of the foal to develop.

“It was a slight gamble as Frosted is an unproven stallion, but we ultimately felt that she was such a good physical as a weanling and she is a half to a champion sprinter,” Redwall’s Hannah Wall said after selling Lot 301.

“So as a type, on pedigree and the fact she is a filly where there was always going to be residual value there anyway, we were pretty strong on her as a foal. We all knew that it just had to come together here.”

Their judgment was ratified by the status of those who bought them, with Spendthrift buying the Frosted colt and Newgate/China Horse Club/WinStar Farm acquiring the colt by Not A Single Doubt.

Ampulla Lodge’s Stephen Jostlear had the January Magic Millions Sale picked out as the destination for Lot 160 as soon as he saw the colt ahead of the 2019 Magic Millions National Weanling Sale.

“When you are looking at a weanling, you should have in the back of your mind what sale he will go to,” Jostlear told TDN AusNZ.

“He was just a straight-up Magics horse. It wasn’t very difficult to see what he was going to grow in to. He was a typical Not A Single Doubt, an early maturing horse and Magics suited him perfectly.”

The importance of type

The key aspect for Jostlear when picking out a potential pinhook, beyond anything he may notice on the pedigree page, is type.

“We look for something that we think is a beautiful type or is going to grow into a beautiful type. You have to look into the crystal ball a bit. That’s our main idea behind it, to make sure you have the right type and have the sale picked out,” he said.

That is echoed by Eva Heron, who runs Highline Thoroughbreds in Cambridge with her husband Cam, and will offer three pinhooks of their own at the upcoming New Zealand Bloodstock Yearling Sale at Karaka.

“There’s some really nice up-and-coming and new sires and we tend when we are pinhooking to like those new season sires. It can go either way, but it comes back to if you have a nice type and you’ve got a new sire, I don’t think you can beat it really.”

The other advantage which the Herons have is access to an environment which is renowned for producing world-class horses.

“We are looking for those ones that might be slightly weak at the time and bringing them back here to New Zealand. They are going to grow well in New Zealand, where they build a lot of strength. We are always looking for those weanlings we think we can make a lot of improvement on,” she said.

“There’s no better place to grow them than New Zealand. We are lucky with the environment that we have got and the good grass. Being in the Waikato, we get the consistent rainfall as well.”

Fitting the bill perfectly in the catalogue for Karaka is Lot 374, a Dundeel (NZ) colt half-brother to Listed juvenile winner Horizons (Choisir), who Highline Thoroughbreds paid $115,000 for from the draft of Attunga Stud at last year’s Magic Millions National Weanling Sale.

“He’s improved 10-fold and he’s a beautiful type. I can’t get past his type. I can see him going on to the racetrack, he just looks like that type of horse. He’s got a good mind and a good mentality,” she said.

Dealing with the risk

Focussing on the success stories makes pinhooking look like an easy game, but it is anything but. For Jostlear, there is always an element of risk, but the key to successful results is simply backing your judgement, experience and your processes.

“I think it’s a matter of doing it, wasting a bit of money and getting hungry. Of our last 23 horses we have sold, we have made a loss on just one. We’ve broken even on a few but most have been profits,” he said.

“The more experience you’ve got, the less mistakes you make. When you are dealing with your own money it hurts. It’s different from a bloodstock agent, where you are spending other peoples’ money, where if you are spending your own, you get pretty shrewd.

“My wife and I have foaled down so many foals over the years and we’ve watched them grow and develop. We did that for 20 odd years before we started pinhooking. Really, if we can’t pick a good weanling out, we shouldn’t be in the game.”

Financial returns are obviously what the business is about, but they are not the only measure in which the Herons of Highline Thoroughbreds judge their success.

“You have to back yourself 100 per cent. There is always the risk no matter what you do with horses, whether it is pinhooking or racing,” Heron said.

“At the end of the day you can have some great successes. It’s not just about the return you get. You might have a horse that might not get as much as you want, but then it goes out and does something on the track. We get a lot of pleasure out of that.

“We want to make money, but it goes back to the basis of our pinhooking, finding a nice type that can go and do it on the racetrack.”

Putting it on the line

While the Heron’s judgement will go on the line when they offer the Dundeel colt, plus colts by Deep Field (Lot 98) and Preferment (NZ) (Lot 133) at Karaka, Ampulla Lodge’s season has just begun with another six pinhooks catalogued at the Inglis Melbourne Premier Sale and three at the Magic Millions Adelaide Sale.

Jostlear is also excited about taking a colt by Exceed And Excel out of Zenaida (NZ) (Zabeel {NZ}), which was purchased for $240,000 at the Inglis Great Southern Sale, to the Inglis Easter Yearling Sale.

The colt, from a half-sister to New Zealand Horse Of The Year Vosne Romanee (NZ) (Electronic Zone {USA}) was set to be offered at the Gold Coast but was withdrawn.

“It would have been nice if we could have got him to Magics but it wasn’t to be. I think he is that classic type that Easter will love,” he said.